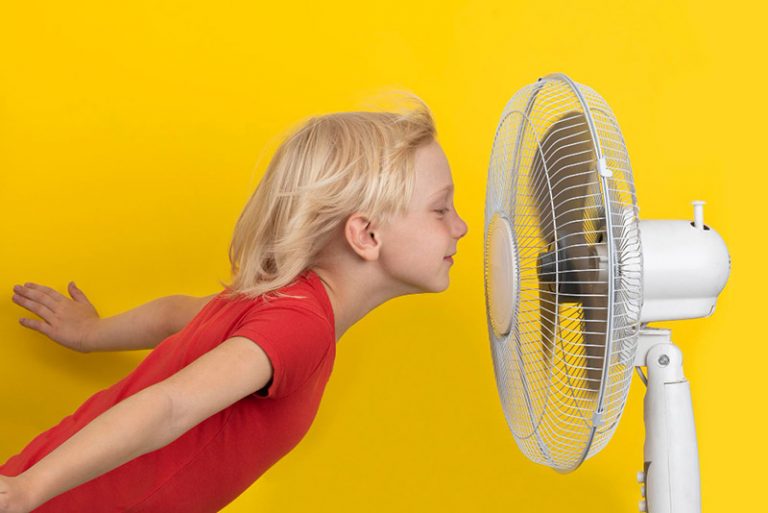 It’s hot in your home, and you want to cool down.

An air conditioner could work, but holy moly are they expensive!

Why not just obtain an ordinary fan, then?

Yes, buying a fan in place of your usual AC unit is much cheaper, but how much electricity does a fan use?

In this article, we’ll discuss some details surrounding what kinds of fans you can buy, how much power they take, and what they can cost should you use one or several in the long term.

Aside from being easy to install, regular fans as opposed to a full window AC unit will save you a lot of money on your next energy bill.

Depending on the model, a fan can also double as a room light, as many ceiling fans are usually equipped with one.

Yes, these advantages are great, but what about their power usage? That depends on what kind of fan you get.

If your needs are simple, and can deal with a small 4 inch table fan (one of the smallest available), you’re looking at 28.5 watts per hour.

At the opposite end of the fan spectrum, let’s use a whole-house fan as an example.

This would take 600 watts to run in the same time period.

For the best-selling fans worldwide, the average wattage appears to be 42.5.

To know which kind is most fitting for your needs, consider how much of your home you wish to cool down, and how often.

Chances are that the bigger the fan, the more cooling you can get done, but you will also have to pay for more electricity consumed.

However, even the most expensive tower fan (about 100 watts) you can get on the market pales in comparison to how much you’d be spending on a portable air conditioner, which could range from 500 to 1,400 watts!

Not only would buying such a unit be a massive up-front cost on your part, but it will also require more dollars on each monthly energy bill.

Say you want to cool off a single room. Installing a ceiling fan can do the trick.

The wattage of one depends on the fan blade size.

For example, a larger 52-inch-blade fan will use 90 watts, while one that uses 36-inch blades will only use 55. Bigger is better when it comes to cooling, but could also be a bit more expensive.

However, another factor to consider when buying any fan is its energy efficiency.

Look out for the “ENERGY STAR” on several models of the type of fan you wish to buy. A fan equipped with this label will use less electricity for more performance.

Not only is getting one environmentally friendly, considering most are equipped with LED or CFL lights, but having the ENERGY STAR label will mean smaller costs for your electricity use at the end of the month.

If a ceiling fan sounds too small for your purposes, you could also try a whole-house fan.

These can be large and require up to 600 watts of energy to run, but will be less of a burden on your bank account than owning a portable air conditioner.

In addition to being cheaper than a traditional AC unit, whole-house fans can cool off your entire house plus attic.

If having a whole-house fan installed sounds like too much work, you could also try running a window fan.

These models will typically cool one room only, and require around 35 to 100 watts of electricity.

However, with two window fans, you could use one to draw in cool air from the outside, and use the other one at the opposite end of the house to blow out hot air.

In total, this setup would require 70 to 200 watts of power.

Considering how complex technology is becoming, it’s no surprise that smart fans are now out on the market.

Despite the steep initial costs, these fans can be programmed to turn on if the room has reached a certain temperature, can turn off when a person leaves the room, and you can control and track them using an app on your smartphone.

The power usage on these types varies, and depends on how often you want to run them.

How To Calculate Fan Electricity Usage

Now to get down to brass tacks.

To calculate how much it will cost to run your fan for a month, or even a full year, you need to know several things:

Your energy bill will use kilowatt hours as the base unit to calculate how much money you owe, so it’s important to convert the total number of watts used into kWh.

Take the amount of power you convert by the amount your energy company charges you per kWh.

That will let you know how much it costs you to run that particular fan per hour.

To get a more detailed version of this method, try out the conversion table on this website.

If you understand what your cooling needs are for a full year, do calculations for multiple kinds of fans.

What you’re looking out for are the hidden costs of running one for long periods of time.

Does that tower fan seem a bit pricey to get?

Well, if its energy efficiency is top-notch, it may cost you less to run than a smart fan you’re also interested in.

Now you have a little more knowledge than before, take some time to look at the specifics of any fan that catches your interest.

Remember that running any kind of fan for long periods will always mean a larger energy bill.