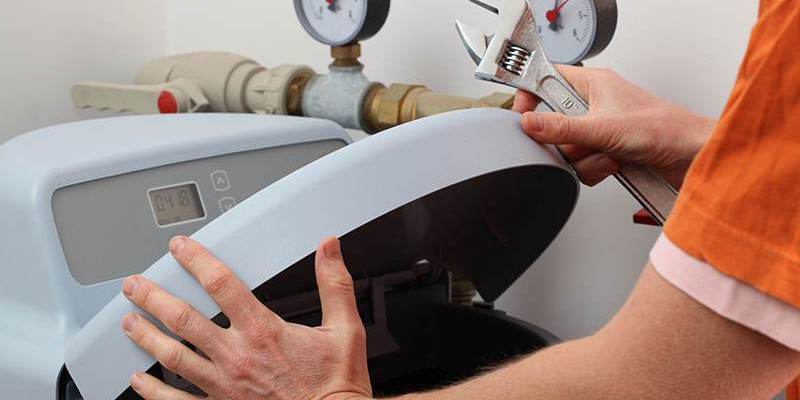 Okay, so you’ve got yourself a water softener in the garage so that your home’s water is a bit softer, but how do you keep it working well? Like any household appliance, there is some maintenance required to ensure that you keep the system working at its most efficient level.

Before we get into the best ways to care for and maintain your water softener, we should point out that if you bought a brand new home with a warranty, then there is a good chance that the entire system is covered by that warranty.

Sure, you’ll still want to keep it working at it’s optimal output and not have to replace it too soon, but it’s a good peace of mind if you know in advance that your home warranty likely covers it in the event that it does need replaced.

Ensuring Your Water Softener System Has A Long Life Span

First things first, you need two know that most of these systems have two distinct parts – the brine tank and the resin tank. In some of the systems, you find both tanks in one unit, and in others you have two separate units for the tanks.

This is where you put in the salt pellets. In a two-tank system, the brine tank in typically the larger of the two. Maintaining this tank is super easy – you just need to keep salt in it.

Pretty simple, eh? As long as it doesn’t run out of salt, then your system will continue to work as intended. However, it’s important that you don’t overfill the tank with salt, cause that can cause some salt clogs that you’ll have to deal with later. We suggest that you never fill the tank above 2/3 full.

Landmark Home recommends that you add more salt to the tank once the current supply reaches around a fourth of the tank. The exception here is that if you’re going out of town for an extended period – then you want to fill that tank up enough to cover the entire time that you’re gone.

You’re also supposed to clean out the brine tank regularly, though to be honest I’ve never done this and the longest I lived in a home without doing it is two years. So, I guess this is one of those ‘do as I say, not as I do’ moments!

The benefit of cleaning out the brine tank is that you make sure that the system is only using clean brine to generate the resin. Cleaning the brine tank consists of the following process:

To be honest, you don’t have to do a lot of maintenance or upkeep when it comes to the resin tank. There are some instances where you might need to replace the resin or deal with some sediment damage though.

Replacing the resin is something that you can do on your own, or you can have a local plumber do it for you. Honestly, this isn’t something that we’ve ever done on our own, but we do know the basic steps if you want to DIY this process.

Yeah, that’s a lot of steps, which is why we suggest calling a plumber or local water softener professional to take care of it for you.

If you follow the brine and resin tank steps above, then you should be doing your part to make sure that your water softener system has a long life span.

Getting Rid Of Salt Bridges

Have you ever opened the lid of your brine tank to discover what looks like a shelf of salt? This hard crust is called a ‘salt bridge’ and is a very common occurrence in home water softener systems. But, if you notice it, then you need to take care of it.

The bridge creates an empty space between the water and the salt, preventing the salt from dissolving into the water to make brine. Without the brine, the resin beads that soften the water can’t do their job.

Some of the things that cause salt bridges include:

You can use a broom handle to push down in the salt to determine if you have a salt bridge. You can also use the broom handle to break it up. But regular maintenance is the best way to prevent one of these from happening.

How To Fix This Problem

If you haven’t been keeping up on maintenance, it’s easy to remove the salt bridge. Here are the steps:

So, while it’s not a difficult problem to fix, you can save yourself some time by keeping up with regular maintenance so that you never get a salt bridge in your home’s water softener.