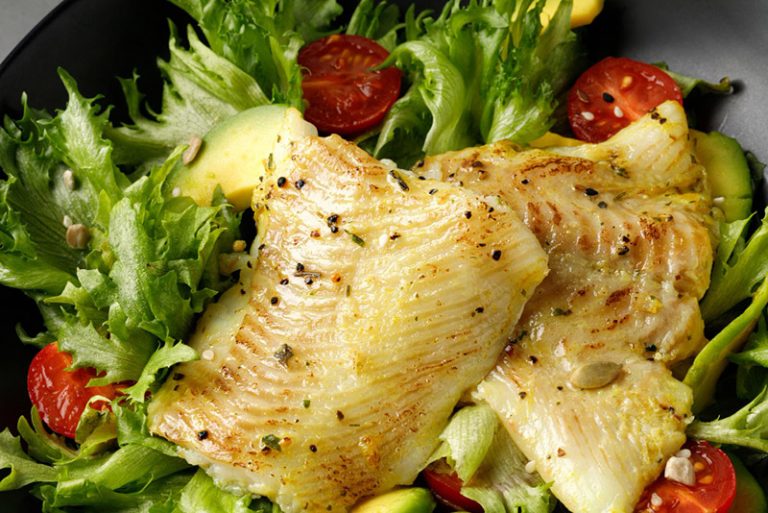 If you’ve enjoyed some halibut in a restaurant, then you may have looked to buy some fresh halibut to make at home.

But halibut is expensive, so you likely were shocked at the cost of a fresh filet of this yummy white fish.

The main reasons halibut is so expensive are that it grows and reproduces slowly and we’ve over-fished it in local waters.

Below we’ll go into more detail on why halibut costs so much compared to other fresh fish.

Contents show
Halibut grow slowly and live for a long time.
Why is Halibut Endangered?
How Much Does Halibut Cost?
How Big Do Halibut Get?
Should We Eat Halibut?
Final Word

Halibut grow slowly and live for a long time.

They can live to be over 50 years old, which means that halibut populations take a long time to recover once they’ve been overfished.

Why is Halibut Endangered?

Halibut is a type of flatfish famous for the mild, buttery flavor of its flesh.

As a result, the fish is popular in restaurants and at home.

Unfortunately, this popularity has led to overfishing.

Although populations are rebuilding, many halibut species remain endangered due to commercial fishing and climate change.

To meet the demand, fisheries took advantage of new technologies that allowed them to catch more fish faster than ever before.

These techniques caused an uptick in bycatch—the unintentional catching and killing of marine life like birds and turtles—as well as damage to underwater habitats that are vital for halibut development.

In addition, populations were further threatened by climate change due to rising water temperatures that are considered harmful to juvenile halibut growth rates and migration patterns

How Much Does Halibut Cost?

The price of halibut at your local fish store can often seem outrageous.

It’s not uncommon to pay $35 a pound or more for the white, flaky fish.

When compared with other species, the price of halibut seems extraordinarily high, but it is actually one of the best priced fish on the market when you consider what you are getting for your money.

In seafood markets across America, wild caught halibut costs roughly $20-$25 per pound as a whole fish which is only slightly more expensive than other whole wild caught species like swordfish and tuna.

When compared to farm raised fish like salmon, cod or tilapia, the price of halibut is about twice as much.

But unlike these other species which tend to be greasy and watery in texture and flavor, halibut remains firm, dense and moist when cooked correctly.

Each serving will have less fat and calories than farmed varieties while providing a hefty amount of protein along with healthy Omega 3 fatty acids and B vitamins making it a nutritious meal choice that is packed with flavor without breaking the bank.

How Big Do Halibut Get?

Halibut is such an expensive fish for a few reasons, but one of them does have to do with the size.

The largest halibut ever caught was in 1996 by a commercial fisherman named Les Anderson.

That halibut weighed 459 pounds and was 8 feet long! How did he reel that thing in?

But you shouldn’t expect your local grocer to be selling halibut that large.

The average length of a farmed halibut is about 16 inches, while wild ones can grow up to eight feet long.

If you’re wondering why size matters, it’s because bigger fish are likely to be older ones — which means they’ll have more time to accumulate contaminants like mercury and lead.

Should We Eat Halibut?

Since halibut are endangered, you may be wondering if you should be eating this white fish.

Ultimately, decision of whether or not to eat halibut is a personal one that you need to make for yourself.

Now that you know the status of halibut, you are better informed to make this decision.

There are good reasons that halibut is more expensive than a lot of other fresh fish.

Because it grows so slowly and takes so long to breed, halibut is rare and hard to find in fresh water.

And over-fishing has made halibut even more rare and endangered in fresh waters.

That is why halibut is so expensive in the grocery store and local fish markets.