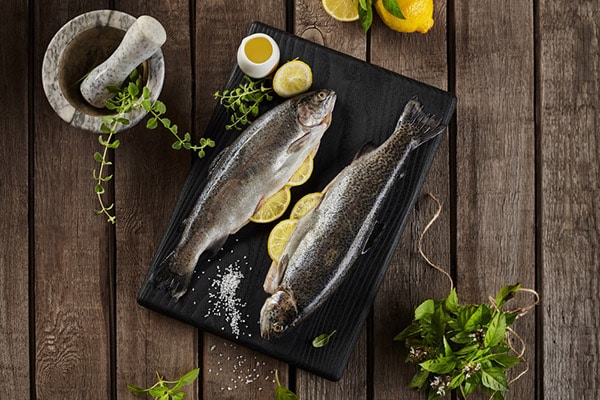 If you’re looking to incorporate more seafood into your diet and to consume more omega-3s, then you may want more variety than a can of tuna.

As you explore your options, you may land upon steelhead trout and salmon as possibilities.

But if you’re like most people, then you may not know which fish is the better option for your meals.

We’ve done the research so you don’t have to.

What Is Steelhead Salmon?

Until recently, I’d never even heard of steelhead salmon. And after doing my research, I found out that it’s not really salmon at all!

This may sound crazy, but this fish starts out its life as a rainbow trout, which is fresh water fish.

Then, as the fish matures it morphs into a steelhead and migrates to the ocean.

As a result, this fish goes by many names:

But not matter what you want to call it, we’re talking about the same thing here.

How Does Steelhead Trout Taste And Look?

Since the steelhead spends more time in the salty ocean water than in fresh water, it is more salmon than it is trout.

As a result, the steelhead has meat that is pink in color like a salmon.

You’ll find that wild caught steelheads have a nutty flavor, while those that are farmed have a more earthy flavor.

How Does Steelhead Trout Compare To Salmon?

As mentioned above, the steelhead trout has a lot in common with salmon, especially since the steelhead is more closely aligned to the salmon than the trout.

Even though the pink meat of the steelhead is a but darker than a salmon, the flavor you get when you cook it is very similar – a subtle, nutty taste that pairs well with fresh herbs, like dill.

Is steelhead trout as healthy as salmon?

If you’re shopping for the healthiest fish possible, then I recommend that you chose wild caught instead of farmed for the better flavor and healthier option.

Does steelhead trout taste like salmon? Yes, it can be difficult to tell the difference between the two fish.

Both steelhead trout and salmon offer you the benefits of omega-3 fatty acids.

Other nutrition differences between these two:

Which is better for you steelhead trout or salmon?

As you can see above, they both offer similar benefits, so you’re just as well off eating either of them.

That’s because they’re both good for you and packed with omega-3 fatty acids.

Which is more expensive steelhead trout or salmon?

If you’re on a tight budget, then you may prefer to choice the cheaper of the two fish.

On average, salmon is more expensive that steelhead trout.

The steelhead trout is cheaper than salmon, at a saving of around $4 per pound less than salmon.