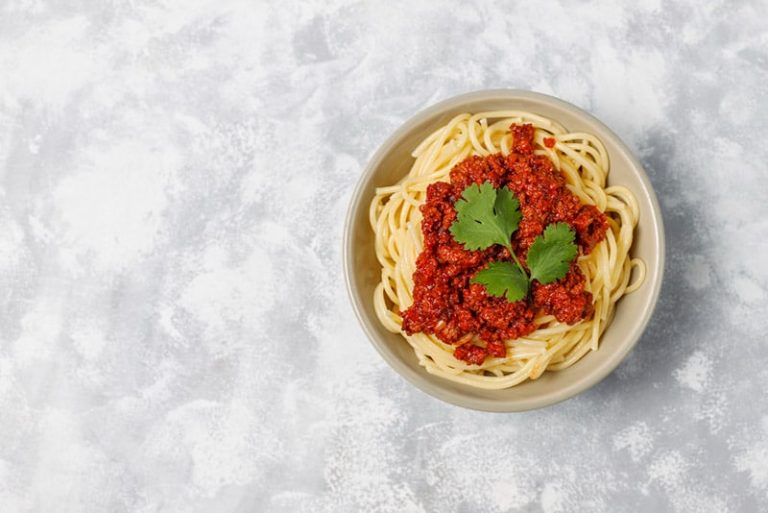 When you think about the perfect plate of spaghetti with marinara sauce or meat sauce, what comes to mind?

For me, it’s that thick and hearty spaghetti sauce.

But what if your spaghetti sauce comes out all watery and thin?

Don’t fret if this happens to you!

Your spaghetti dinner is not ruined – you need just to thicken that spaghetti sauce before serving it.

Below we’ll cover everything you need to know about thin, watery spaghetti sauce.

Why Is My Spaghetti Sauce Thin And Watery?

There are really only two main reasons why you end up with a spaghetti sauce that is not thick.

Often people end up with a good, thick spaghetti sauce only to put it on a plate of spaghetti noodles that didn’t get drained enough.

And the excess water that pasta holds mixes with the sauce, which thins it out.

That’s how most people end up with a watery spaghetti sauce.

If you’re making your own homemade sauce for spaghetti and it’s too thin, then you likely just have some excess liquid in it.

This is something that is very common since fresh tomatoes are so freaking juicy.

Usually this just means that you haven’t let the sauce cook long enough for that excess liquid from the tomatoes to evaporate.

So, if that describes you, then remember to give yourself a bit more time the next go around so that you can cook it for the proper amount of time to remove the excess liquid before serving.

Luckily, this is something that is super easy to fix.

How To Thicken Spaghetti Sauce

There are a few different ways that you can thicken a spaghetti sauce that is too thin and watery.

The best way to thicken spaghetti sauce is to let it simmer on low heat.

This allows some of that excess water too cook out of the sauce.

Overall, this is a pretty quick process.

Another option for thickening the pasta sauce is to add in a bit of cornstarch.

The cornstarch method is not ideal since it weakens the integrity of the sauce.

A third option to thicken the sauce before putting it on your pasta is to add in some of that starchy water from where you cooked the pasta.

The fourth, and final option, is to not fully cook your noodles in their pan but to instead let them do their final minutes of cooking directly in the sauce pan – with the sauce.

To do this method, drain the pasta and then stir it into the sauce.

You’ll discover that the starch from the noodles helps to thicken up the sauce.

Just don’t leave this combo cooking too long or the noodles with break down into a soggy mess in your pasta sauce – and no one wants to eat that mess!

The Problem With Watery Spaghetti Sauce

If you’ve ever been served up a plate of pasta with thin spaghetti sauce, then you already know why it is such a problem.

So, you get a forkful of pasta with essence of sauce because that watery sauce is still on the freaking plate!