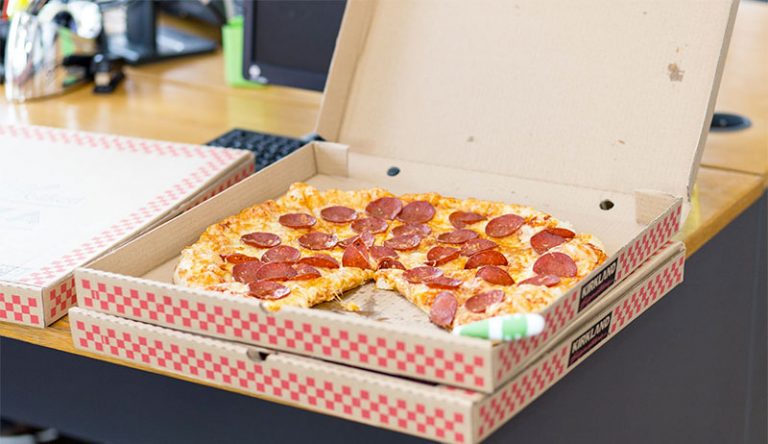 If you’re not making your pizza from scratch at home, then you’re either buying it at grocery store or getting it from a local pizza shop. And when you buy pizza out, there’s always cardboard – either the pizza box or that piece under the store bought pizza.

We did the research and have the answers to those questions, and more, below.

Is It Safe To Put Cardboard In The Oven?

No, it is not safe to put cardboard in the oven. Honestly, when you think about it, this one should really be common sense.

I mean, it’s kind of a paper product, right? And we all know that paper burns, which is also what cardboard does.

That’s right, cardboard is definitely combustible and if you put it in an oven that’s on it may catch fire!

Usually it takes a high temperature over an extended period of time to ignite the cardboard in the oven, but why risk it?

Right now you might be thinking that I’m not serious cause you’ve seen those pictures on social media of people putting their store bought pizza right on the oven rack with that piece of cardboard under it.

Here’s the thing though, when the piece of cardboard is on the rack under the pizza, it’s not directly touching a heating element. So, it won’t catch fire right away. That’s how these people have gotten away with it.

But there’s also plenty of people online telling how their kitchen filled with smoke after the pizza cardboard caught fire in the oven.

So, while it might be okay, there’s no reason to risk it since there is a very real fire hazard here.

What About Pizza Boxes In The Oven?

Those cardboard boxes that pizza is delivered in are even worse for the oven and more of a fire hazard. So, no, never put a pizza box in the oven to heat up your pizza.

Unlike the cardboard under the store bought pizza, cardboard pizza boxes often have some coatings and chemicals on them that makes them even more prone to catching fire.

And on the lucky chance that you do this and it doesn’t catch fire, those coatings and chemicals and leech into your pizza and you don’t want to be eating that stuff!

Can you keep pizza warm in the box in the oven?

Now, if you’re just storing the pizza box in your oven temporarily – WHILE THE OVEN IS OFF – then there is no harm here. Just don’t forget it’s in there when you turn the oven on.

Can you put a pizza box in the oven on low?

No, you cannot put the pizza box in the oven on low. Regardless of the temperature setting, there is still a very real fire risk.

Plus, remember all the chemicals in the pizza box that can seep into your food? You don’t want that in your body!

Why Do Store Pizzas Have A Cardboard Base?

You might be wondering why the heck the store gives you that cardboard base if you’re not supposed to put it in the oven to cook your pizza.

So, I have one question for you – have you ever tried to hold an uncooked pizza with just your hand? You can’t because it’s too flimsy with that uncooked dough!

That’s why store pizzas have a cardboard base – because it’s a sturdy way to hold and move the pizza without dropping it. Even fully cooked pizzas are hard to handle without dropping.

What Can You Use For Baking In The Oven Instead Of Cardboard? (and Reheating!)

1. Use A Pizza Stone

If you make a lot of pizzas at home, then you’ll definitely want to get a good pizza stone. These things are awesome at cooking pizzas and giving you the perfect crust.

I got one of these at IKEA for real cheap and it works well for cooking and heating up pizza in the oven.

3. Use A Baking Sheet

If you don’t have a pizza stone or pizza pan, then you can just use a normal baking sheet. In my house, we call it a cookie sheet, but it’s the same thing – the rectangle shaped baking sheet.

The only bad thing about one of these is that sometimes your pizza is wider across that the baking sheet, so the edges of your pizza aren’t really on anything.

4. Go Directly On The Rack

Though you can’t do this with everything, you can certainly plop your pizza down directly on the rack. Though, doing it this way can result in a big mess if you’re not careful.

The cheese may melt and drip off the pizza onto the oven bottom, so you might want to consider covering the lower rack with some foil like my nana.

Speaking of foil, you can also heat up your pizza in the oven on a piece of aluminum foil. You can put the foil directly on the rack for baking.

When I do this, I put the pizza on the foil first, and then pick up the foil by the ends to transfer it to the oven rack.

The best thing about this method is the easy no-mess clean up.

As you can see, the risk of using cardboard in the oven is too great to ignore. You definitely do not want to have to deal with a fire in the kitchen, so it’s best to keep the cardboard out of the oven.

So, toss those pizza boxes and use one of our other methods for heating up (and reheating) that pizza safely in your oven.