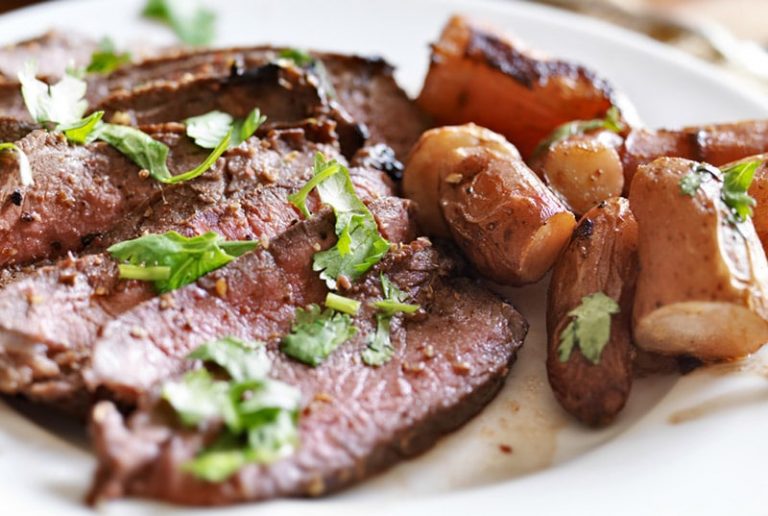 A London Broil steak may sound intimidating to some cooks, but the recipe is pretty straightforward and produces a flavorful and decadent piece of meat.

London Broiling a steak allows you to do some prep ahead of time, which makes this a great choice for the centerpiece of any dinner party.

Because a London Broil steak is marinated, you can use a less expensive cut of meat.

The marinade acts as a tenderizer, so you can use top round or flank steak.

The meat should marinate for at least two hours, but the longer, the better, so consider preparing your marinade and soaking the steak the day before.

Best Way to Cook London Broil in the Oven

As the name indicates, the best way to cook a London Broil is by broiling it.

When the oven is set to broil, only the heating element on the top of the oven will come on.

You will want to position your top baking rack about six to eight inches below the top of your oven, close the door, and set the oven to broil.

Allow about 10 minutes for the heat to build up in the oven’s top heating element.

Take the meat out of your marinade and use a paper towel to gently blot the excess liquid from your steak.

Using a broiling pan, place the steak under the broiler and close the oven door. (Some ovens have broiler elements that don’t maintain their heat when the oven door is open.)

This may vary a little depending on your oven and the thickness of your steak, so follow the temperature guides on your meat thermometer to be sure.

How to Cook London Broil in the Oven at 400

High, direct heat is the best way to seal the flavors into your steak, but can you also cook a London Broil in a 400-degree oven?

The answer is probably, but your results may not be the same as with a broiled steak.

Your oven’s heat will be coming from the top and bottom of your oven.

Flipping your steak is still a good idea to get a good seared surface on both sides, but you won’t get the same crispy surface that you get with broiling.

How Long to Cook London Broil in the Oven at 425

Most broilers heat to about 500 degrees, so if you choose to cook your London Broil in the oven at 425 degrees, the cooking times will be slightly longer.

Add two minutes per side to the broiling times listed above and be sure to use your meat thermometer to test for proper doneness.

How to Cook London Broil in the Oven at 350

Once you drop the oven temperature below 400 degrees, you are roasting your meat.

London Broil, and most steaks, are cut to be cooked quickly, leaving a seared, crispy surface and tender, flavorful interior.

At lower cooking temperatures, the fat in a piece of meat will liquefy and drip away, while higher temperatures tend to sear, seal, and crisp up some of the fat in your steak.

If you are cooking a London Broil at 350 degrees, you will still have a flavorful piece of meat, but it will not have some of the sizzling characteristics associated with a true London Broil.

Roasting the steak will also add to your cooking time.

Allow about two minutes per ounce of meat.

Begin checking the steak’s internal temperature at the 12-minute mark for your preferred level of doneness.

How Long to Cook London Broil in the Oven at 450

Roasting a London Broil at 450 degrees is the closest you will come to broiling the steak.

Be sure to completely pre-heat your oven to 450 before putting the steak in as this will help sear the surface and produce a crisper texture that is more similar to broiling.

You will need to adjust the times for broiling your steak by adding one to two minutes per side.

Be sure to keep the oven door closed once you place the steak inside and only open the door to flip your steak.

The ingredients in a London Broil are classic, and each plays a part in producing a final steak that is tender, juicy, and tasty.

Soy sauce is a great way to infuse flavor into your London Broil.

If you’re concerned about sodium levels, use low sodium soy sauce and adjust the sodium level on your own.

Lemon juice adds both sweet and tart flavors to your marinade.

The natural acidity of lemon juice will help tenderize the meat during the marinade period.

Olive oil not only adds flavor to your marinade but also gives a level of richness to your steak by adding another kind of fat.

Worcestershire Sauce gives marinades a great flavor profile that goes well with cuts of beef and its vinegar base helps with tenderizing meat.

Minced garlic, Italian seasonings (like rosemary, thyme, marjoram, and basil), salt, and pepper are seasonings that you find in a traditional London Broil.

Get adventurous and try your own unique seasonings.

Most importantly, whatever cooking method you use, letting your meat rest before slicing and serving is the final step to ensure you have a tender London Broil.

Resting stops the cooking process and helps the fluids from the fat to be redistributed throughout your steak.

If you cut a steak immediately after cooking is finished, the juices (which come from the meat’s melting fat) will drain out, and you’ll be left with a dryer and tougher steak.

When you take the meat out of the oven, remove it to a cutting board and loosely cover it with foil for about 5-10 minutes (depending on the size and thickness).

After resting, slice your steak against the grain.

If you are not sure how to tell which way the grain runs, make a small cut at the narrowest end to check the direction of the grain.

Making a London Broil will give you a great experience in marinating and cooking a delicious steak dinner.

Enjoy serving this classic steak to your family and friends!